Recognized as one of the top ten regional universities in the Midwest by US News & World Report, the University of Evansville has a long-standing reputation of excellence.

Evansville’s William L. Ridgway College of Arts & Sciences hosts a prestigious theatre program, in its own right. Its students have been invited to perform at the Kennedy Center more often than any other school in the nation. The university has also participated in the Kennedy Center’s American College Theatre Festival Program since its inception in 1968.

In 2010, InterAmerica Stage, Inc. designed, engineered, and installed SkyDeck™ for the University of Evansville’s Shanklin Theatre. This project is particularly notable because of the unique ceiling cutout. The pentagonal shape is located directly above the three quarter thrust stage. You know what else is cool about U of Evansville’s grid? 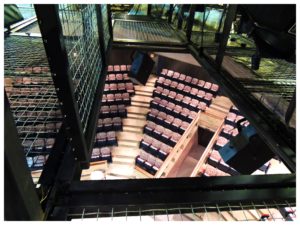 It has a hinged panel that allows theatre students and staff to easily pull lighting and sound equipment up onto the grid without wrestling a man-lift through the house. Fast and safe can (and do) exist in the same space at the same time!

Evansville’s theatre department typically produces four main stage and two studio productions per year. The department’s official YouTube channel is filled with clips and sneak peeks of productions. Most impressive are the “Making Of” videos, which showcase the process that students, faculty, and staff undergo to prepare for each new production.

Take a look at what some of the alumni have been up to:
Matt Williams – producer of Home Improvement, and writer for The Cosby Show
Rami Malek – actor and Golden Globe and Emmy award winner for best drama series for Mr. Robot
Jack McBrayer – actor on 30 Rock
Deirdre Lovejoy – actor on The Wire
Jim Michaels – Golden Globe nominee and NAACP Image Award winning television producer of Supernatural and Everybody Hates Chris