Remember last week’s post about the grid extension at Baltimore’s Everyman Theatre? The post called out the unique tiered construction of the grid and subsequent extension. The design choice begged the question: why tiered? Of course, it optimizes flexibility, but how, exactly?

We reached out Everyman Theatre’s Technical Director, Bill Jamieson, to learn more. Mr. Jamieson explained that when the SkyDeck™ system was originally installed, they intentionally chose to end the system about 11’ downstage of the rear wall of the theatre. “The idea was to retain maximum flexibility over the back half of the stage. If we wanted to install ad-hoc rigging on the structural steel above the stage, we could do that and have the ability to fly things in and out – with limited head room, of course – or else we could have very tall scenery and multiple deck levels. As we got used to working in the space, we installed a semi-permanent pipe grid over the stage where there was no tension grid.” 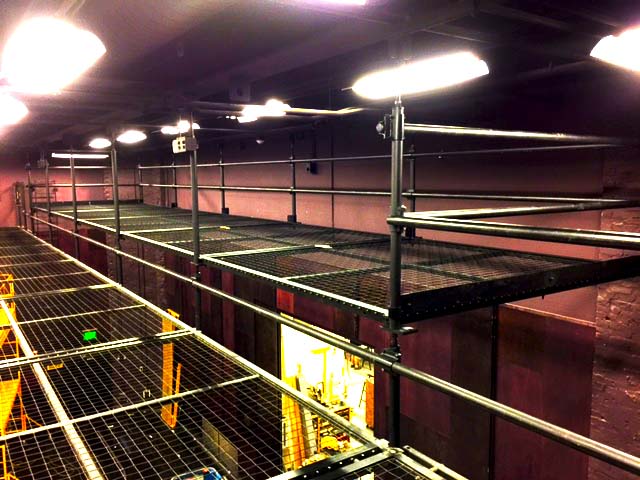 Having a pipe grid above the stage was great for lighting. Accessing the lighting equipment, however, was a different story. “Once the scenery went in, it was very difficult to access the lighting units above for focus or maintenance,” Mr. Jamieson said. Everyman Theatre decided to extend the tension grid 8’ upstage. The extension is 2’ higher than the original grid surface, allowing plenty of room for tall scenery.

Mr. Jasmieson said, “We have walking access above almost the entire stage now, which will make things much easier for lighting and rigging technicians, and save a considerable amount of time and trouble.”

And that’s the point of having a SkyDeck™, isn’t it?