There are very few folks in the entertainment industry who don’t know Red Rocks Amphitheatre. A Rolling Stone magazine poll named the venue the “coolest outdoor amphitheater in the nation” and it’s easy to understand why. Nestled between two enormous monoliths of rock – Ship Rock to the south and Creation Rock to the north – Red Rocks Amphitheatre is a the only naturally occurring, acoustically perfect amphitheater in the world.

IA Stage’s founder and president, Mark. T. Black could barely contain himself when the company was awarded the project. “Are you kidding?” Black said. “Red Rocks is a bucket list destination for many folks. I had seen a show there [years ago] and I remember thinking how cool it would be to see a more robust stage tower with a SkyDeck. And now here we are!”

Like the entertainment industry as a whole, Red Rocks was heavily impacted by the pandemic and had to cancel the bulk of its 2020 programming from April up to now. Some events have been rescheduled, of course, but the remainder of 2021 carries a lot of expectations for the historic venue. 2021 not only marks the 100-year anniversary of Red Rocks as a concert venue; it’s also the year that the storied venue will unveil a new stage roof.

The renovation of the stage roof is part of the Elevate Denver 10-year bond program, whose mission is to enhance the City and County of Denver through critical improvements to the City’s infrastructure. Explaining how this program came to benefit Red Rocks, Tad Bowman, Venue Director, stated it plainly, “The current stage roof was installed in 1988 and it has outlived its life expectancy.”

He went on to explain that the original structure wasn’t architecturally pleasing and didn’t really fit in with the natural aesthetic of Red Rocks. The city and county of Denver selected lead architect Short Elliott Hendrickson Inc. (SEH) to conduct a feasibility study to determine whether the renovation was possible. Using drone filming and 3D point cloud technology, SEH was able to complete the study and generate accurate digital renderings of the space. GH Phipps Construction was brought on as general contractor, with Kyle Casinelli serving as Project Manager for the renovation. 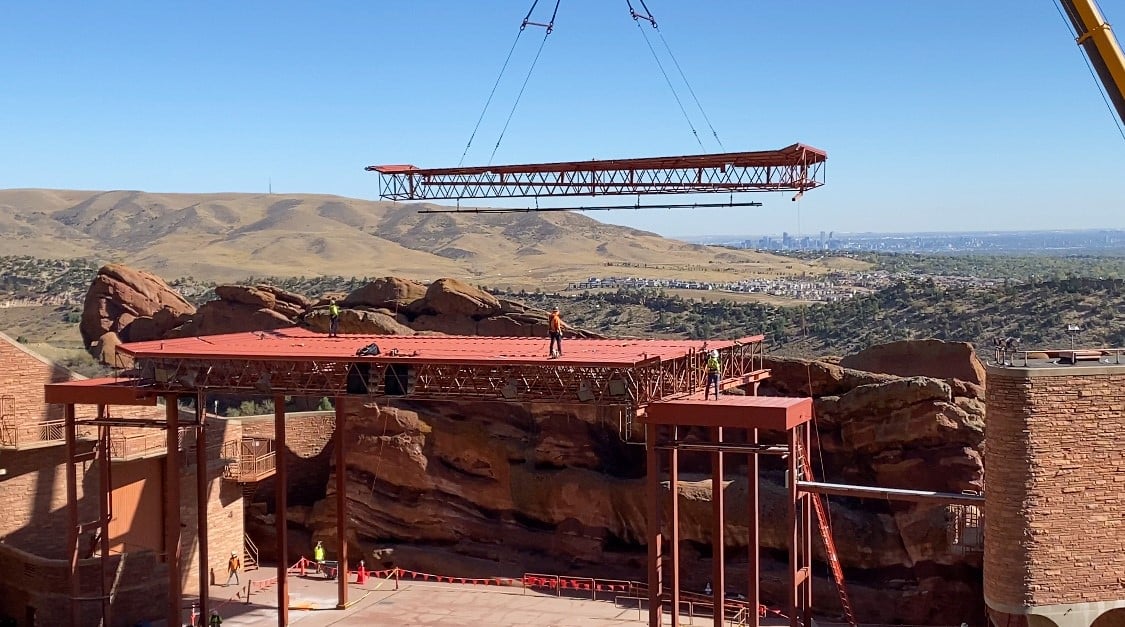 Bowman added, “The functionality [of the roof] could have been better and we were looking to provide more protection from the weather. We wanted the structure to be able to take more weight and we wanted a safer environment for our riggers.” SEH’s aesthetically pleasing and highly functional design included IA Stage’s SkyDeck™ tension wire grid. The original roof was cut off in four strips and removed with cranes. Then, the original 8 support columns were pulled out of the earth. Four new footer locations were identified and dug out 6’ below the stage floor. At each location, 6 to 9 micro piles were drilled down to the bedrock, and upon reaching it, drilled an additional 14’ into the bedrock. Four concrete pile caps were poured on top of each of the new footers to create 2’ – 3’ thick concrete foundations to support the new steel columns.

At stage floor level, the bases are round formed-concrete columns that begin to taper as they reach 12’0” high. They are topped with 5’4” high poured-in-place concrete splayed (y-shaped) columns. The arms of the splayed columns, which are finished with a metal column wrap with fully welded seams, continue to reach upwards at predetermined angles until they reach 36’10” where they meet to form in the shape of a rough W on either side of the stage. 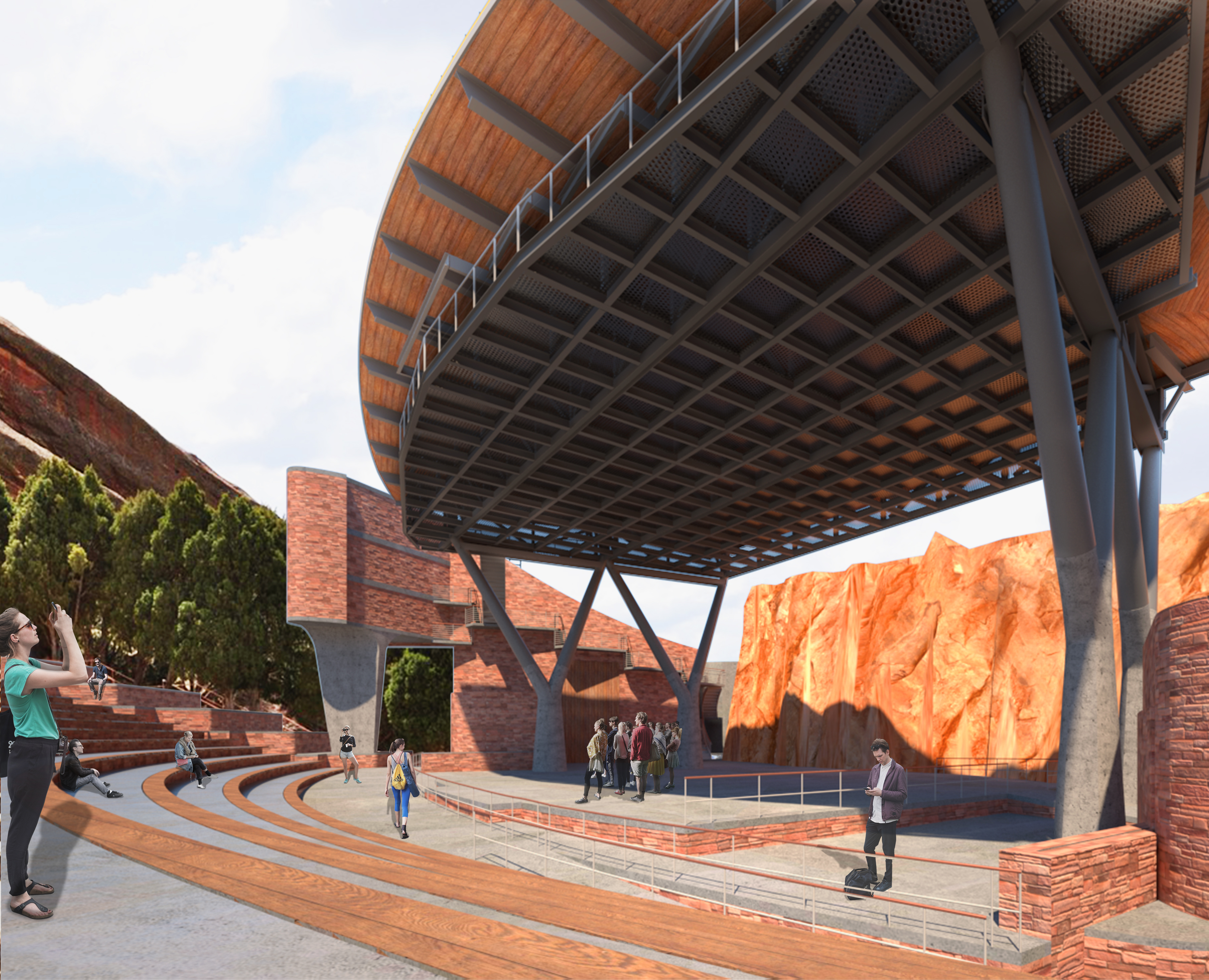 The three main trusses that hold up the new roof sit on top of each point of the Ws running SR to SL. Two additional trusses that connect the three mains are located on the outside edges of the roof structure, running upstage to downstage. These outside trusses, while more substantial than your typical bridging truss, are indeed bridging trusses. They are the connection point of the roof structure to the support columns below.

3 smaller bridging trusses, running US to DS and distributed on 10’ centers from centerline, complete the truss system that holds up the SkyDeck™, the rigging steel, and the roof. The original structure could support roughly 36 thousand pounds of rigging equipment. The new structure was designed support 150,000 pounds of evenly distributed load. Note that the stage itself is not affected by the weight of the structure nor will it be affected by the weight of rigging equipment when the venue is open for concerts again.

Situated inside the truss system at 40’2” above the stage floor is a network of evenly spaced steel I-beams, which are attached to the bottom chords of the three main trusses and the two larger bridging trusses. These I-beams, arranged in a grid pattern, hold the 88 modular SkyDeck™ II panels in place. SkyDeck™ II is catwalk-rated tension wire grid with a live load capacity of 50lbs per square foot.

The SkyDeck™ panels are attached to the I-beams via proprietary IA Stage saddle brackets. A saddle bracket is pretty much what it sounds like: a piece of metal formed to sit on top of an I-beam, much like a saddle sits on top of a horse. Rather than stirrups, which hang straight down from a saddle, there’s a sturdy metal shelf/flange that sticks straight out from both sides of the bracket. Those shelves/extensions/flanges are where the SkyDeck™ II panels sit. Each SkyDeck™ panel is strung with stainless steel cables woven on 2” centers to form the sturdy mesh surface.

Two feet above SkyDeck’s woven wire walking surface is where you’ll find the structure’s rigging steel, which is composed of structural channel. “The grid was designed so that everything can be deadhung,” Tad Bowman said. “There’s no need for bridles.” The flexibility of hanging positions is enhanced, however, with the addition of 4” grid wells on each side of every SkyDeck™ panel two feet below. A grid well is simply a gap between the SkyDeck™ panel and the surrounding I-beams that allows you to easily rig through the grid wherever you’d like. Each panel is sheathed with IA Stage’s EdgePro™, a formed-steel guard designed to protect SkyDeck’s wire rope end-fittings as well as rigging slings and hardware from potential damage. EdgePro™ fits snugly to SkyDeck™’s panel edge, maintaining its patented low profile for a flush and safe walking surface and is finished in high-visibility safety yellow to further mitigate trip hazards.

SEH’s Alex Rauch, the architect who designed the roof renovation explained how the venue has a one-of-a-kind system of 84 moveable spanner beams on the same level the tension grid.

“Imagine the three main trusses, ” he said. “Truss 1 is located approximately 12’ from the downstage edge of the roof; Truss 2 is roughly 25’ upstage of Truss 1; Truss 3 is about 25’ upstage of truss 2. Moving SR to SL, the length of these three trusses is split into 10’ wide bays. In between each bay is a custom engineered apparatus constructed of C channel placed back-to-back with 10” in between. A piece of angle sits on top of the C channel, point up, like a little triangle, where it meets a V-groove wheel that’s attached to the bottom of a spanner beam.

“And if that is not enough, the venue also has a stock of around ten to twelve pieces of 12×12 aluminum box truss that live up there on the rigging level. Mistakes happen, right? If you’ve already loaded and locked a spanner beam in place and discover that you need another pick point, you simply walk upstage, grab a piece of box truss, and drop it into place exactly where you need it.

“Another cool thing that IA Stage came up with is the set of hinged panels,” Rauch added. Rounding out this incredible rigging set up is a set of gas piston assisted hinged panels located upstage right. They open at center, like double doors, allowing you to bring equipment up through the roughly 5’ x 8’ opening in the grid with a chain motor.

The entire rigging level is surrounded but a guardrail, meaning riggers can move about freely without lifelines. Rauch chose to place post and cable railing around the downstage edge and about halfway upstage along both sides. The railings are more industrial upstage where audiences can’t see them.

The SkyDeck and rigging steel are accessed via a metal staircase (not a ladder!) located offstage right center and anchored to the bottom of the north tower. The existing structure couldn’t support the new stairs and because the north tower is a historical piece of architecture, Rauch was careful, as he put it, “to pay homage to the north and south towers by minimizing the impact of new construction.”

Topping off this impressive structure is the actual roof: a gently sloping plane with a faceted edge that, from the audience’s point of view, looks curved like the rocks around them. Dark brown pre-patinated copper standing-seam metal roofing faces the sky, while the underside of the roof features engineered straight grain tongue in groove Douglas fir. Rauch designed it to aesthetically fit in with the natural surroundings and the care and attention to detail that was put into the project was obvious as he described the design process. The Red Rocks Parks District was added to the National Register of Historic Places in 1990 and was designated as a National Historic Landmark in 2015, so every phase of the renovation had to be approved by the Historic Society.

Rauch said, “We were approved fairly quickly for the mass and scale portion of the design,” but when it came to the details of the design – specific materials and such – the project developed organically. “Function followed form” he said, because it had to. “The Y-shaped columns took their shape because we had to limit penetration to the existing structure, not because we were trying to mimic trees.” The roof is a series of structural steel girders, albeit tapered on the ends to soften the silhouette, layered with the Douglas fir, ¾” pressure treated sheathing, and full coverage ice and water shield. But when visitors allow their eyes to travel up from the stage floor, they will see  a graceful, soaring structure that looks as organic as the landscape, quietly waiting to let those red rocks sing again.

For a schedule of events at Red Rocks Amphitheatre, click here!