Renovations of the Credit One Stadium (formerly the Volvo Car Stadium) on Daniel Island in Charleston, SC, are well underway. The twenty-year-old stadium is due for an upgrade, and this reno will transform the facility into a world-class tennis and concert venue. The $40 million renovation is privately funded by owners of Charleston Tennis LLC, Kelly and Ben Navarro, as a gift to the city. The city of Charleston will contribute $3 million towards the project over the next four years. 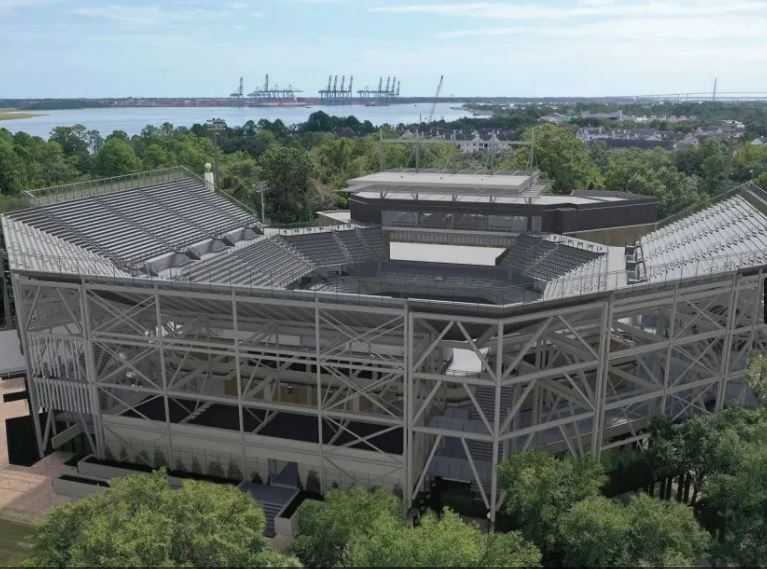 According to Bob Moran, president of Charleston Tennis, LLC, and director of the Volvo Car Open, the vision for the new stadium is to rebuild it into a bowl-shape, which will expand seating from 7,500 to 11,000. The increased capacity “adds flexibility to the kinds of events that can be easily staged here from small festivals to concerts to other kinds of gatherings,” says John Tecklenburg, Mayor of Charleston. The expanded facilities feature a 70,000ft2 Stage House with a host of amenities including primo locker rooms along with state-of-the-art physical therapy and exercise space to support player wellness. The plans also include space for media/production and food prep. The VIP Club, which is located on an upper level and includes a restaurant and outdoor bar, overlooks the Billie Jean King Stadium Court. 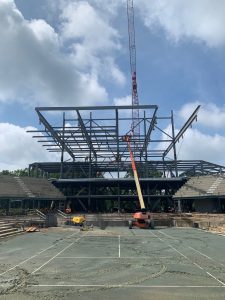 Attached to the Stage House, which is located on the south side of the arena bowl, will be a permanent SkyDeck canopy that extends north over the court, shading fans and protecting the stage area and musical/theatrical performances from the weather. The SkyDeck canopy is comprised of 85 modular tension wire grid panels covering approximately 4500ft2. The canopy is approximately 115’ wide and extends roughly 60’ north over the court. The SkyDeck™ provides the infrastructure necessary to accommodate rigging for lighting, sound, and projections for those events. The seats beneath grid are removable to allow set up of temporary staging.